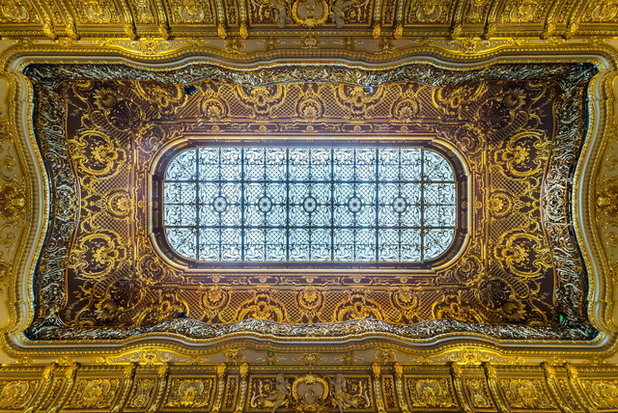 “I want a gold apartment, all in gold”… “a Customer recently asked for a Golden toilet as a throne”… “I had a client with the “Golden lion” on the stairs…” these are All real stories from the field of interior designers.

Why in XXI century people still order anything extravagant-gold for private interior?

Reason 1. Theory samples
Gilding, thrones and the lions are strongly associated with status and expensive interior.

All patterns come from childhood. And where do most average Russians lead and carry on trips in the tours? The palaces! And, historically, show there are mainly ceremonial, richly decorated room, and not outbuildings or staff quarters. 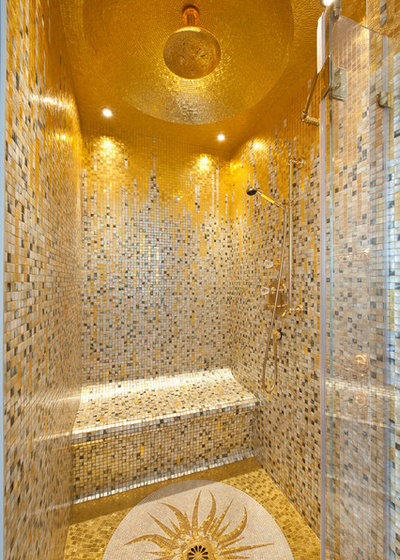 Is it any wonder that people in the head is fixed such way the status of expensive interior, for respectable people? And many are trying to implement it as soon as you can afford. Even in small apartments.

Designer Olga Andryushchenko: “Why still [asking] gold interiors? Specifically, the project with which I worked, the customer thought that the only way to spend money, the only way you will see that it’s expensive. Sometimes it works to negotiate and convince customer. But alas — not always“. 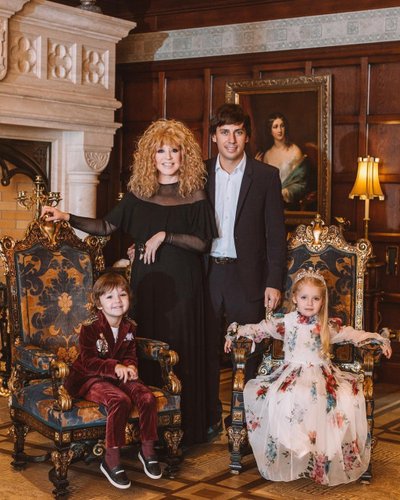 Fact: Talking about samples, we are not always talking about historic Palace interior. In the spirit of traditional luxury is still building houses (palaces) of celebrities.

Photo: instagram.com/maxgalkinru. Portrait in the interiors of the family castle in the village of Dirt 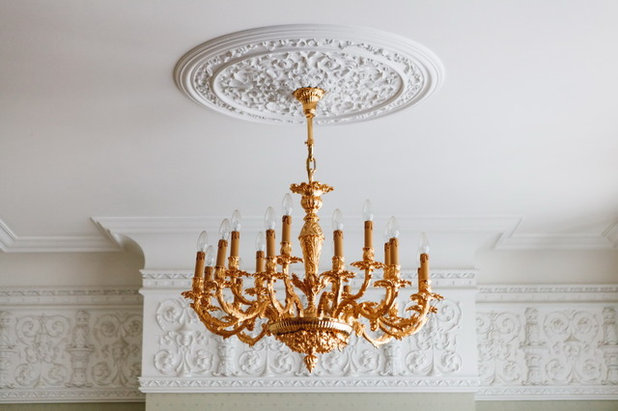 In one of the polls we wrote: “…As bequeathed classic, Palladio, Rossi, Cameron and all who worked in the Baroque era and classicism”. The quote is revealing. And if you do not find fault with the art mistakes, she talks about “old art” as a significant benchmark. There are samples, which seem to be most familiar and understandable — important for many customers. Hence the love for the stucco, even if it is made of plastic. To gilded carvings, to historic styles in furniture and many other redundant things. In contrast to the modern styles and negative associations like “poor little, but neatly”. 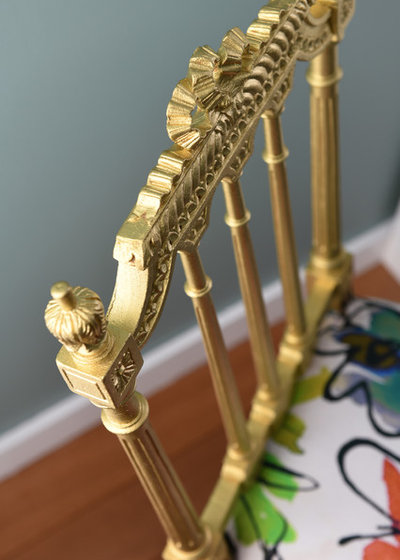 2. the cause of Choose the wrong role models
Our country as a whole is not very lucky with the monuments of modernist interiors. Especially when talking about radical modernism, which sought to free up space and break with historical references and lots of decor. Some projects were not implemented, others have not been preserved, in others it is not easy to get, the fourth condition is that there tours will not go.

In the spring I was in the house-Alvar Aalto Museum in Helsinki and to see visitors ‘ book: for the next few turns there was not a single name compatriots. In fact, the Russian tourists go there, I know for sure. Just, apparently, not so often. Why? Perhaps for the same reasons mentioned above — no habit of seeing these interiors as a role model. 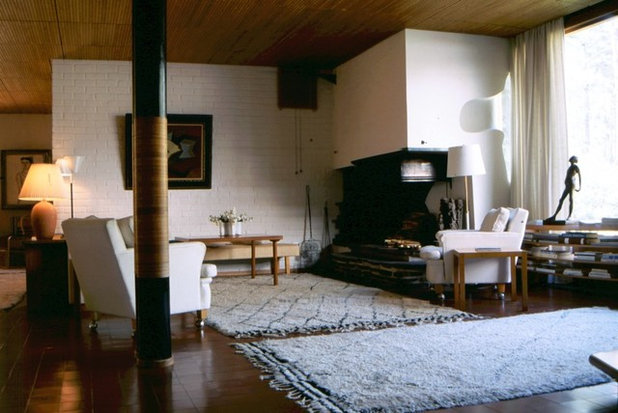 On the photo: Villa Mairea Alvar Aalto in the style that is similar to his own home in Helsinki, but later also for other customers

Probably for the same reason, clients don’t often ask designers to reproduce the interiors of this kind in his apartment. Although from an economic point of view, this interior is very expensive: look at the prices of the items Artek. But it’s not the price, but in the samples that form the link between price and value in the minds. Russian customer often understands comfort and luxury through the gilt and velvet — so historically. 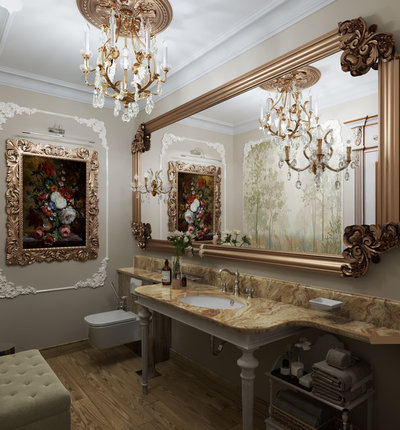 Interior designer Victoria Zakharova: “the Need for embellishment all around lies in our origins. Remember all of our decorative art: painting, Khokhloma, Gzhel, all kinds of embroidery colors, patterns and symbols. And Baroque art, Rococo… Rococo of the eighteenth century is easier to read, but there is use of colour, gilding, an abundance of flower garlands, fabrics etc.”. 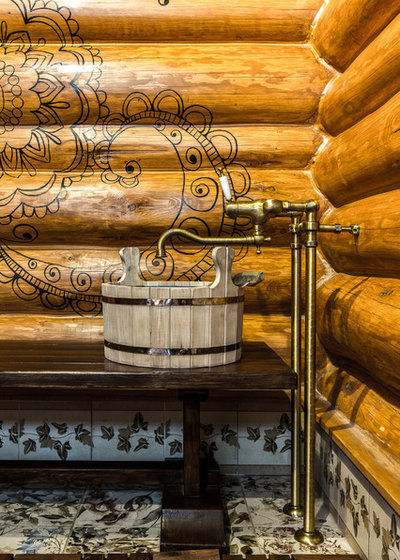 Fact: In modern conditions is not always possible to achieve the desired quality of performance “gold”. Namely, it generates the visual impression of the object. After all, those palaces was the best wizard (or restored the best restorers), and not just a team of repairmen. It usually work projects or items that the designers and the audience will mark as “deep kitsch”.

What to do? To bring the kitsch to the absolute form when gold is looks organic and makes people smile.

READ ON…
Good question: How to create Baroque in the panel house 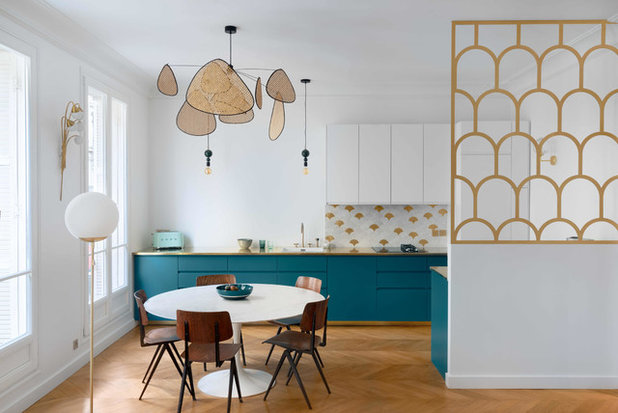 Reason 3. Fashion brass / gold glitter as a sign of the style of the 1970s and 1980s
Suffice it to mention favorite TV shows like “Dynasty,” with its very distinctive style, often excessive, generally characteristic of this decade. 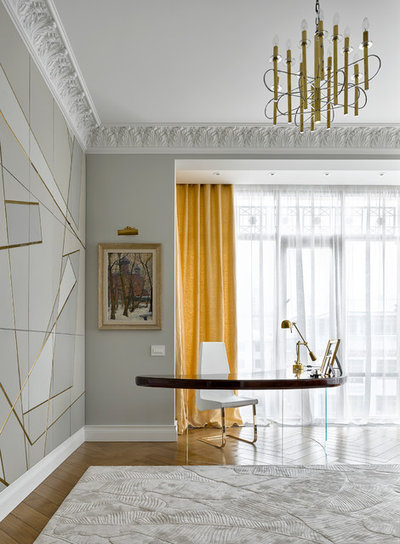 The 1970s and 1980s traditionally called among the main reasons for periodically returning fashion gold metal redundancy in the interiors.

READ ON…
► The style of the 1970s: what it consists Of
► Inspiration from the 1970s: one of the designers to learn
► Three main Maestro of the 1970-ies and where to read about their work 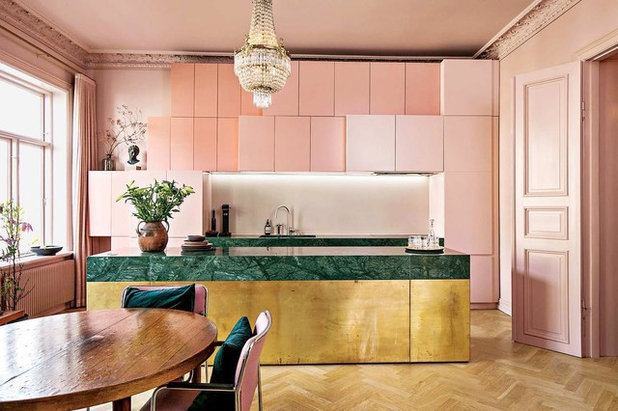 Photo: apartment in Oslo, which is called the essential trends that came to us from the 1970s, this color, and brass, and marble countertop, and a mix of objects of different styles. The authors of interior architects Heidi Peterswald nygård and her husband Andreas nygård 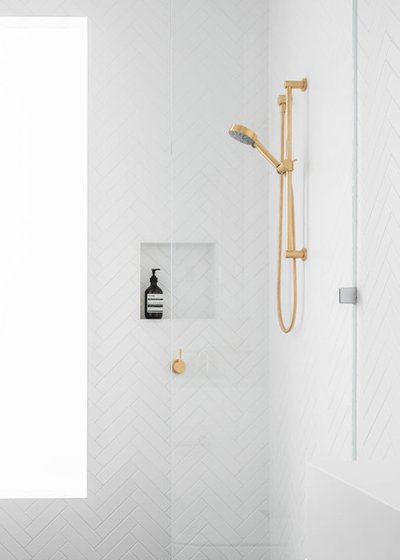 Fact: In recent years, interior design exhibitions, we have seen the dominance of brass faucets, brass buildings furniture, brass only. Unwittingly, this gold soaked not only the designers but also the clients (who often visit the top of the exhibition, along with hired to repair the professional). It is extremely important nasmotrennostyu designer and his ability to cross the border.

Designer Victoria Zakharova: “Harmoniously fit into the interior much. Stick to the proportions of the room and size of furniture plus competently distribute color. Much depend on the style and General mood of the interior. If it’s a modern interior and still the lions is clearly stylized“. 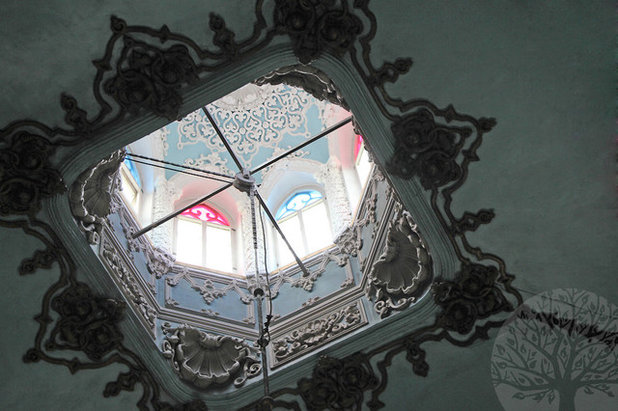 Reason 4. The place where a good
House — is not only a place but a feeling.

Another explanation, which at first surprised us: people ordering “gold”, sometimes reproduce the place where it was nice and positive. Not necessarily the Palace, but… the temple. Here is an example of such a history.

Architect Alexey: “the Client wanted the Baroque as that style reminded him of the temples. The project was implemented. Argued a lot, but in the case. Could not take the object and not to develop, but I chose a different path and work with something new“. 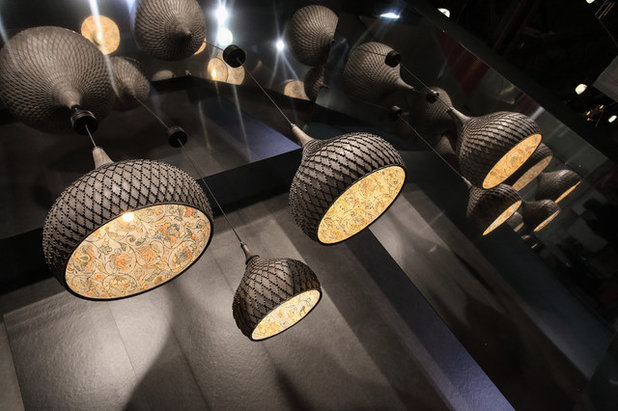 Important: the re-creation or a “retelling” from historical examples in the modern world — a very difficult task. It is easy to make a mistake with the scale and sense of proportion, especially when people with no experience of planning your interior itself. Not always gets right to beat or maintain the object in the interior.

READ:  Pillows in the interior — we arrange bright accents

What to do? Search is not a direct quotation “in a forehead”, but a well made allusion to contemporary forms. Pictured above is a lamp designer Elina Tuktamisheva “Share” with patterns based on the paintings of the Pokrovsky Cathedral. 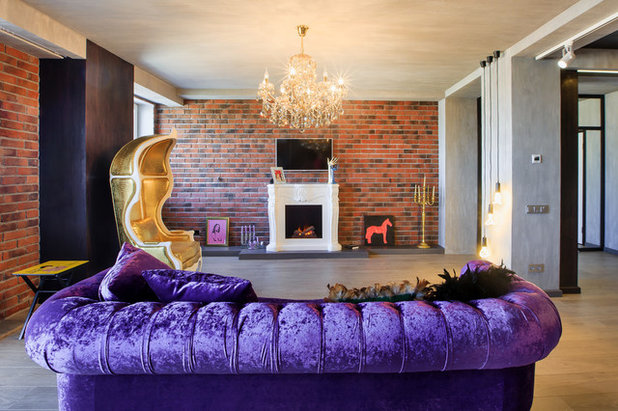 Reason 5. Post-irony
The Golden bowl-the throne of the title of this article is not a metaphor or hyperbole, but an example of a real project, which was implemented a few years ago. Often people are well aware, as can be perceived these things “from zero”. But that is the challenge: to bring to the interior a bit of irony and banter. 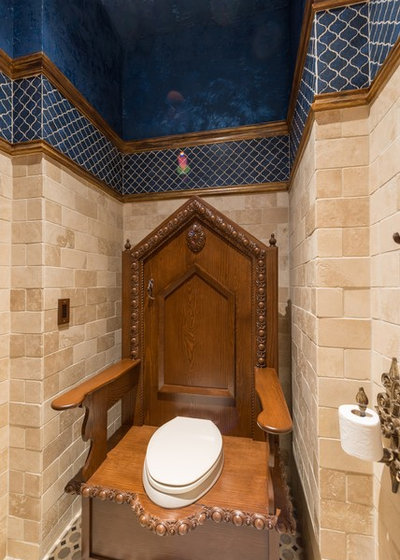 Says the designer, architect and decorator Alice Baronova: “Golden toilet as a throne asked one of my clients. To solve the problem of the art object, using the elements of ceramic and ten kinds of different mosaic. Technically, it is a concrete structure with metal frame, lined with Golden mosaics and decorated with painted ceramics. Specifically, in this case it was pure banter, the result is a great art object. The whole interior was done in fusion style. It was a very creative project — everything in it was outside the box. Therefore, the throne he fits in perfectly. And my team and I got great pleasure from the process of implementation”.

WATCH THE VIDEO…
A bathroom with a throne in the Rostov interior, which told Alice Baronova — scroll to 2:13-2:20 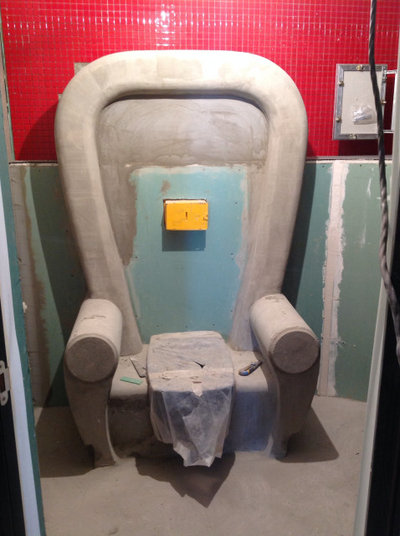 On the photo: toilet-throne in the repair process. Here you can see the construction to which was attached a mosaic finish 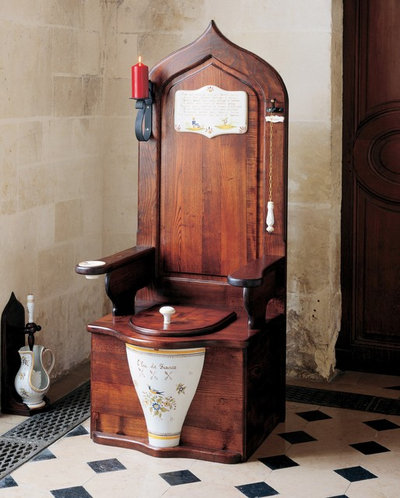 On the photo: the most famous of commercially manufactured toilets-thrones — Herbeau Dagobert Toilet Throne. The prototype was the throne of the Frankish king Dagobert I of the Merovingian dynasty. In addition to porcelain candle holder and ashtrays, are integrated within the housing of the mechanical jukebox (plays an old French tune Le Bon Roi Dagobert when the lid is opened). During the descent of water rings a bell (as in the old days the king announced to his servants that the process is completed). Retail price — about 1 million roubles 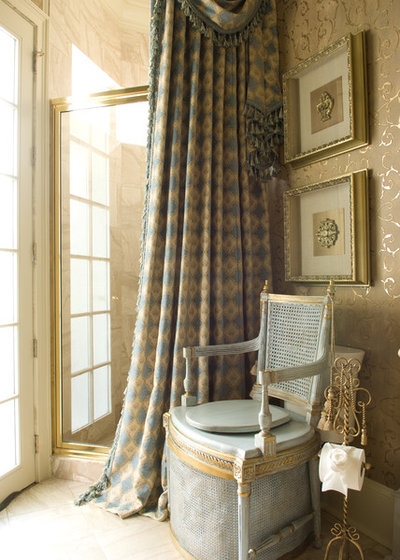 As you can see in this photo, unusual toilets are not as rare as you might think. In addition to Baroque thrones, among the sources of inspiration are also seen in the Empire style and classic chairs or imitation wooden Gothic thrones of medieval kings.

Instead of conclusions
To summarize, the reasons why people want to own the interior of the Golden lion, the toilet-throne or a gold apartment, there may be several: 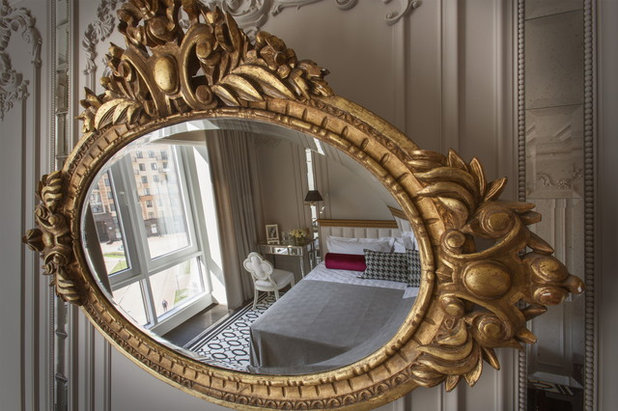 IT’S YOUR TURN…
Among our readers are many practicing designers. Tell us if you got it to work customers asking for a “Golden lion”, a Baroque plumbing, etc. As their owners explained their choice? What do you think, does the gold “sewn” in the Russian cultural code? Share in the comments 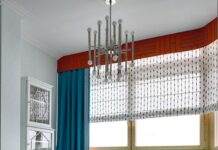 Just a photo: Wow, what are the blinds 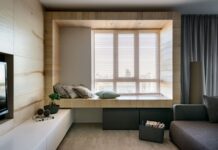 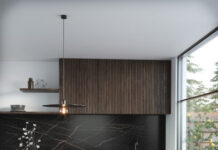 Microtrend: What’s in fashion at the stone — colors, textures, patterns

The attic apartment with the creative spirit in Stockholm