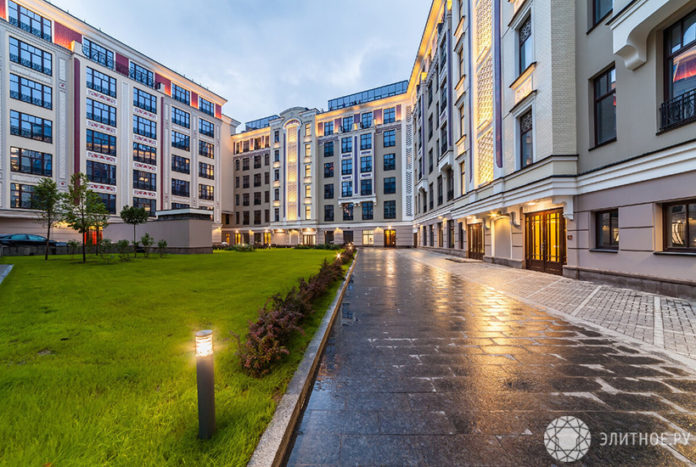 There are still complexes in the capital surrounded by old buildings, in a place with history and houses with their own rich past 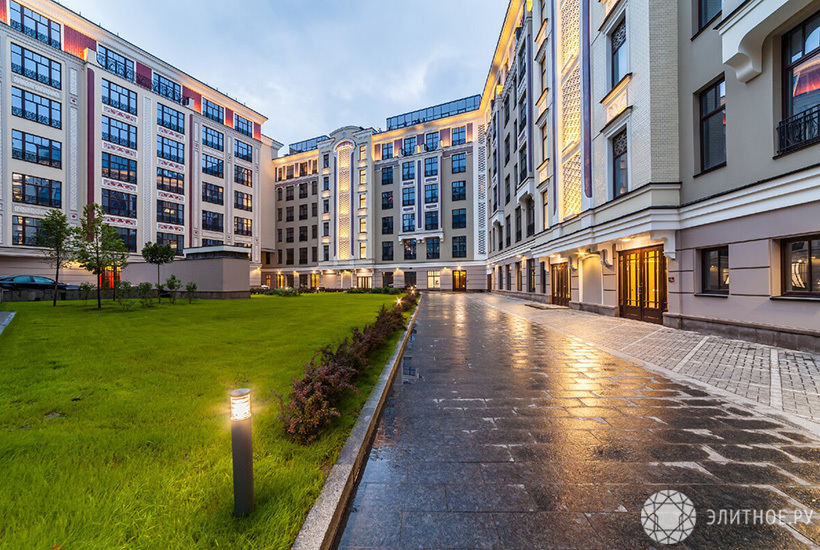 While Moscow is actively being built up with megaprojects with glass and concrete blocks, implemented “from scratch” on the site of industrial zones, in the city center you can also find chamber projects of historical classics.

Renovation complexes surrounded by old buildings, in a place with history and houses with their own rich past. One of them – “Teatralny Dom” – was built by the Hals group of companies in the very heart of the capital, near Novy Arbat and the Boulevard Ring.

The complex is located at the intersection of Povarskaya Street, Merzlyakovskiy and Khlebny lanes. The line of Povarskaya Street was laid by the ancient Volotskaya trade road, which ran from the Kremlin to Veliky Novgorod. In the 17th century, the Povarskaya Sloboda (Povarskaya Sloboda) was formed nearby (chefs and other service personnel of the royal cuisine lived in it), after which the street was named. The settlement had a number of lanes, including Khlebny, in which other employees of the Sytny Dvor settled. And the name of Merzlyakovsky lane comes from the distorted patronymic of Prince Dmitry Mamstryukovich Cherkassky, who had his own yard here.

Under Peter I, the Povarskaya Sloboda was abolished. At the end of the 17th – beginning of the 18th centuries, Povarskaya Street with neighboring lanes, while retaining its “kitchen” name, began to turn into an aristocratic district. It retained its character throughout the 18th-19th centuries. Representatives of such noble families as the Dolgorukovs, Golitsyns and Sheremetevs (the Sheremetevs' mansion in the photo above) lived here.

In the first third of the 19th century – Mikhail Lermontov (in the mansion where he lived, there is now a house-museum, photo below), the parents of Alexander Pushkin. The poet himself also often visited Povarskaya with his lyceum comrades. The first reading of the poem “Poltava” took place in one of the houses. At the end of the 19th – beginning of the 20th centuries, houses of entrepreneurs began to appear in the region, for example, the manor of the Grachevs, where the Norwegian embassy is located today. In 1923, Povarskaya Street was renamed into Vorovskogo Street in memory of the Russian revolutionary Vaclav Vorovskiy, and in 1992 the historical name was returned.

READ:  Real estate prices in 2019 in Moscow. Will apartment prices rise in 2019 - forecast from the portal Elitnoe.ru

On the one hand, Teatralny Dom is located along small side streets. On the other hand, Povarskaya starts from Novy Arbat, part of a major highway. The metro station is also close: Arbatskaya is about a 3-minute walk away. The complex borders on the Povarskaya Plaza business center and Gogolevsky square. School No. 91 is located in another building next door, followed by the Kidsberry kindergarten. A little further along Povarskaya there are the Theater “Center for Drama and Directing”, the restaurant “Rossini” and the Bunin square. Also nearby is the Moscow Dentist dental clinic.

The total area of ​​the complex, which was designed by a group of artists led by architect Pavel Andreev, is 42.5 thousand square meters. meters. These are eight low-rise sections: from four to seven floors. “Theater House” includes parts of the city estate and apartment buildings of the XIX-XX centuries, as well as new construction. 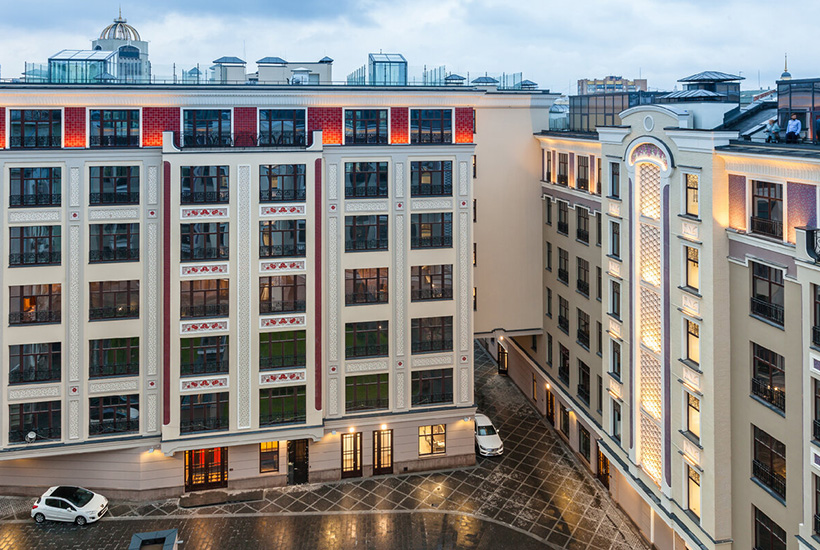 Thus, the building overlooking Povarskaya Street was built according to the project of the architect Nikolai Strukov at the end of the 19th century. At the end of the last century, the Nemchinov Theater worked in the house, and at the beginning of the century, a studio of theatrical director Konstantin Stanislavsky was opened. This is exactly what formed the basis of the concept.

The external neoclassical facades were reconstructed. Decorated elements, molded cornices and pilasters were recreated. The internal facades were decorated in the Russian Art Nouveau style, the friezes were decorated with decorative panels. They are made of glazed ceramic tiles with floral and plant motifs typical of the Art Nouveau style of the late 19th and early 20th centuries. Each section has its own drawing, developed by artists under the guidance of the Honored Architect of Russia Pavel Andreev.

The project has been commissioned for several years, so the entire infrastructure is operational. There is a shop “VkusVill” and a restaurant “Eat khinkali, drink wine”. There is a branch of the Lamoda online store, an Elle Permanent jewelry showroom and a Nebabushka yarn store, and Verp offices. There is a studio for vitamin therapy Aq.lifecare, permanent make-up Elle Permanent and five beauty salons: Beauty Shop, Formula, SLTB studio, Glossy & amp; Go and LIQ Skinbar.

READ:  Which elite new buildings in Moscow are most often chosen by buyers

All sections are united by a three-level underground parking for 283 cars with a license plate identification system and a car wash for two posts. There are also 166 storage rooms.

The concept of a “courtyard without cars” has been implemented on the inner territory of 2.1 thousand squares. Landscaping has been completed, recreation areas and a playground have been created. The access control system and burglar-alarm system, as well as video intercom communication, work.

The decor of the facades continues in the interiors. The lobby is faced with marble and wood, textured oak doors are decorated with stained glass. Chandeliers are made of Bohemian glass, furniture, lamps and decor are selected in the style of the Art Nouveau era. Public areas (pictured below) are decorated with reproductions of theatrical posters and paintings by representatives of the Art Nouveau style in art: Alphonse Mucha and Edgar Degas. Installed lifts from Otis with finishing of lift cabins in the style of interiors. 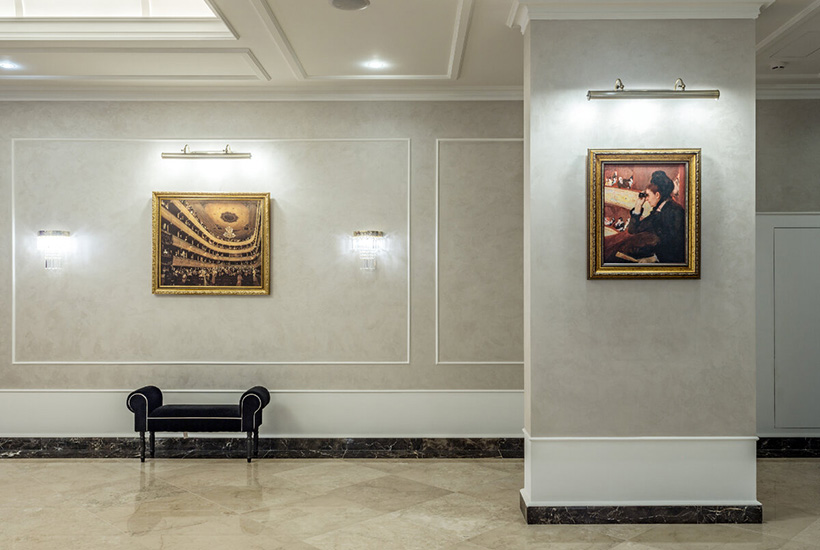 Apartments: from two rooms to penthouses with a terrace

The project includes 129 apartments with an area of ​​67-402 sq. meters and ceilings with a height of 3.2 to 3.8 meters. Each apartment is equipped with an individual general ventilation system, an autonomous multi-zone VRV air conditioning system and a water purification system for drinking water.

The cost of apartments starts from 83.5 million rubles for a 2-room lot with an area of ​​102.4 sq. meters, located on the second floor of the fifth section. It opens onto Khlebny Lane. 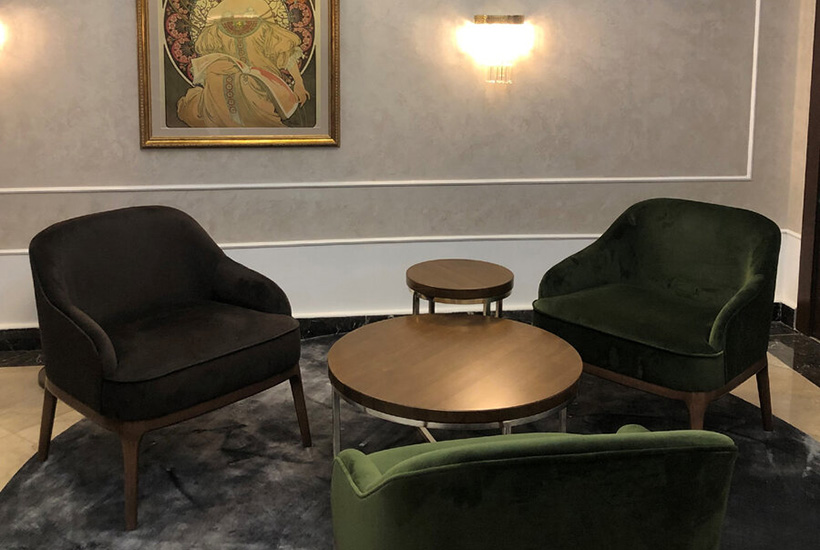 < p> Also, on the top fifth floor of section No. 8, facing Povarskaya, there are two adjacent penthouses for sale that can be combined. These are 3-room lots with an area of ​​181.6 and 183.1 sq. meters with terraces and chimneys for the installation of fireplaces. The penthouses were estimated at 160.4 and 163.6 million rubles. And the most expensive object in the project is proposed on the floor below. Apartment for 401.6 sq. meter with six rooms costs 343.7 million rubles.

Redevelopment of one-bedroom apartments in houses of P-44T

Best of the week: pieces of Wood

Stylish minimalism in a former synagogue in new York