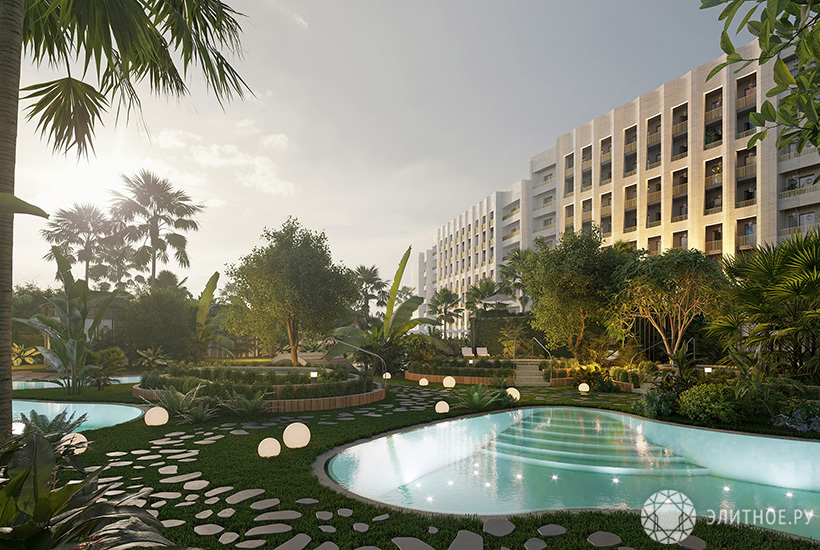 As a masterpiece, they can buy, for example, a mansion in London, a villa on the Cote d'Azur or a penthouse in a modern residential complex

Many people have a passion for collecting. Rich people have more opportunities for this hobby, and they often collect quite expensive and rare items, the value of which will only grow. This is both an aesthetic pleasure and one of the successful ways to save capital. Among luxury goods, vintage wine is the leader in terms of investment attractiveness, having risen in price by 13% over the year (data from Knight Frank for the first half of 2021). Bordeaux 1996 and 2000 are in demand. Second place was taken by watches with an increase of 5%. The rarest watches with an unusual shape – Cartier watches of the 1950s and 1970s – have risen in price the most. The top three also included classic cars with an increase of 4%. Last year, the most notable auction deal was the $20 million sale of a McLaren F1.

The top 10 also included furniture, colored diamonds, jewelry, coins, art, Hermes bags and rare whiskey. In 2021, one of the most expensive works sold at an art auction was In this Case by Jean-Michel Basquiat, which fetched $93 million. The real “boom” was in the crypto art market. Created by graphic designer Beeple, the collage Everydays: The First 5,000 Days sold for $69 million.

Along with luxury items, collections are made from unique real estate. Mostly from trophy real estate, the so-called “piece” lots in the uppermost segment of luxury real estate. These are housing in buildings with an interesting history or built by recognized architects, celebrity apartments, lots with an outstanding location, objects with a panoramic view of landmarks or natural views. 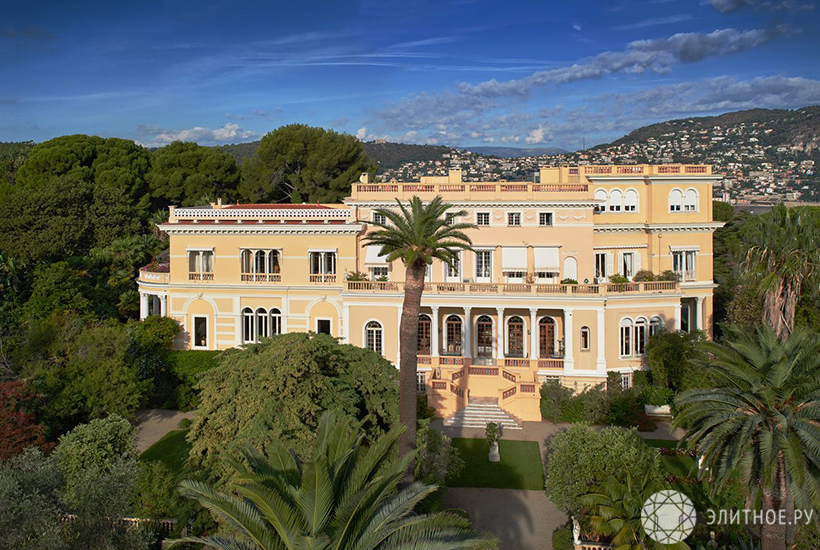 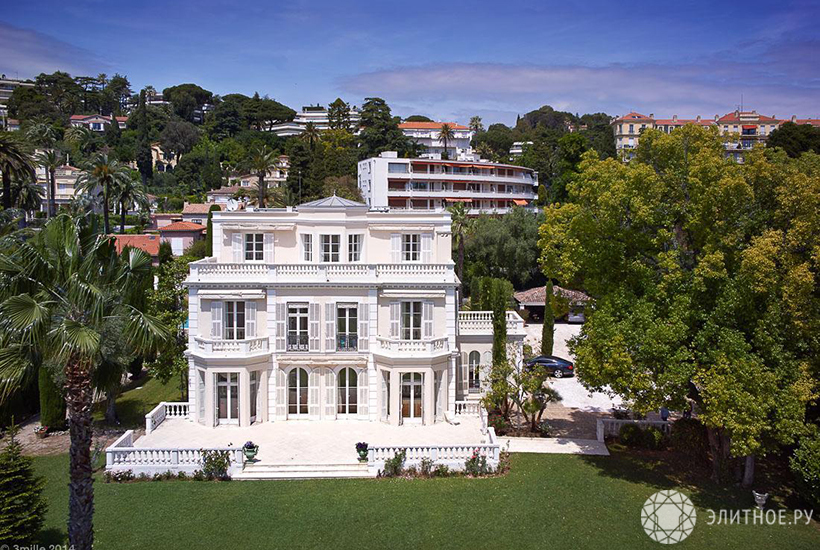 One example of a historic collectible is the Les Cèdres estate in France, which has long been considered the most expensive piece of real estate in the world. One of the owners of the house, built in 1830, was King Leopold II of Belgium. In 2019, the estate was paid 200 million euros (data from Savills). In the same year, a mansion next to the Rothschild Villa, now the Cannes Multimedia Library, went on sale in France. The Edge Road house was built in 1865. The mansion once belonged to the representatives of the English nobility. The object costs 13.5 million euros (Kalinka Group information). And in Scotland, you can buy Seton Castle from the late 18th century. It is an architectural masterpiece of the late Robert Adam period. Until 2003, the castle was owned by the same family – Weymss, and in 2019 it was put up for sale. They asked for $9.7 million for it.

A year later, Agatha Christie's house, a 17th-century mansion in Oxfordshire (Great Britain), got into the sale. It was in this building that Miss Marple appeared from the pen of the writer, and the last books about Hercule Poirot were written here. The cost of the object was estimated at 2.75 million pounds. Also in the UK, the house of a modern celebrity, actor and director Antonio Banderas, is being sold. The building, completed in 2005, costs £2.95m. In 2021, a villa was put up for sale on the Cote d'Azur, which until 2012 was owned and lived there by designers Dolce and Gabbana. The house is on sale for 17 million euros. 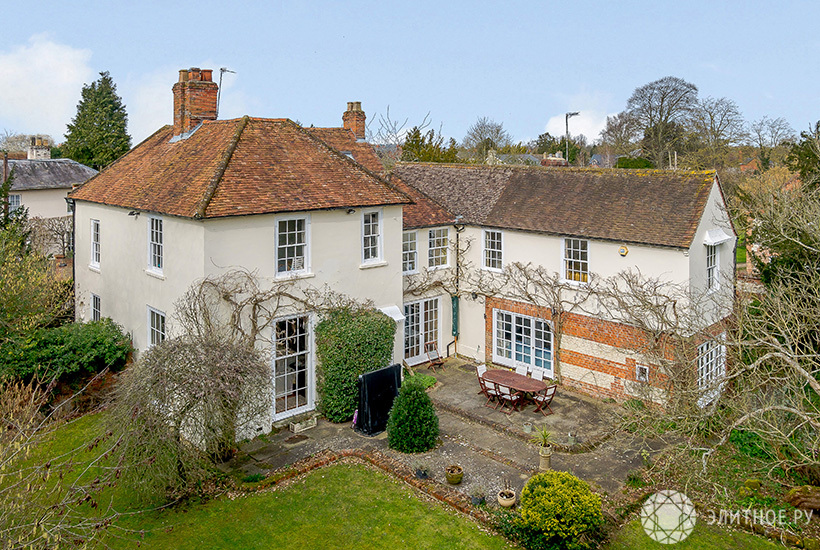 Unique in format housing in modern residential complexes can also be attributed to the collection category. Experts from Knight Frank Russia consider the Mantera Seaview residence project by Five to be the best resort project with apartments in Sochi. The rating took into account such parameters as the distance to the beach, the size of the landscaped area, the number of SPA and Wellness infrastructure facilities, children's facilities, food facilities. In the presence of a hotel operator, the number of points was multiplied by 1.3. The leader had 42 points. Behind the Mantera Seaview residence is the Alean Family Resort & SPA, which received 34 points. The third line went to Volna Residence with 31 points.

Mantera Seaview Residence is being built on 10 hectares of the federal territory “Sirius”. Houses made in the form of a cascade will appear on the first coastline. These are buildings with 319 apartments, a five-star hotel with 400 rooms, a congress center, medical and SPA centers, a fitness club, restaurants and shops, recreation and relaxation areas. The complex will have 11 swimming pools, including eight with sea water. Over three hectares are reserved for a park area and a garden with fruit trees. 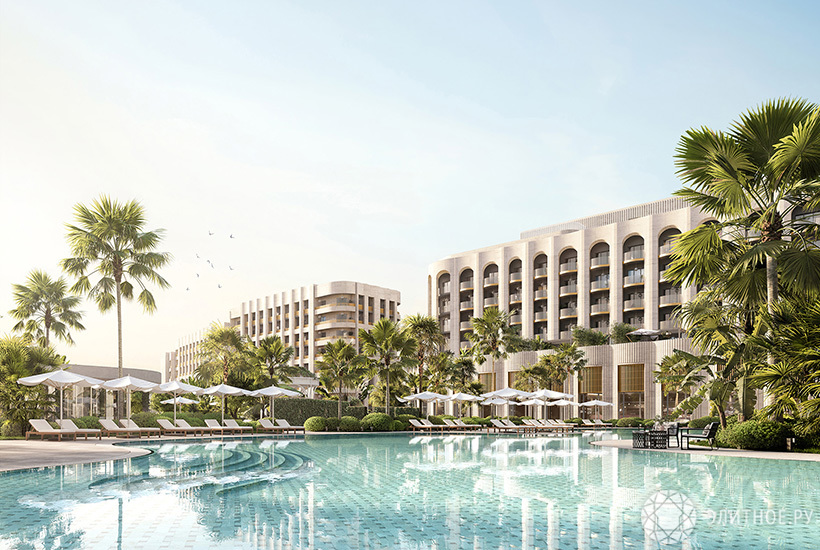 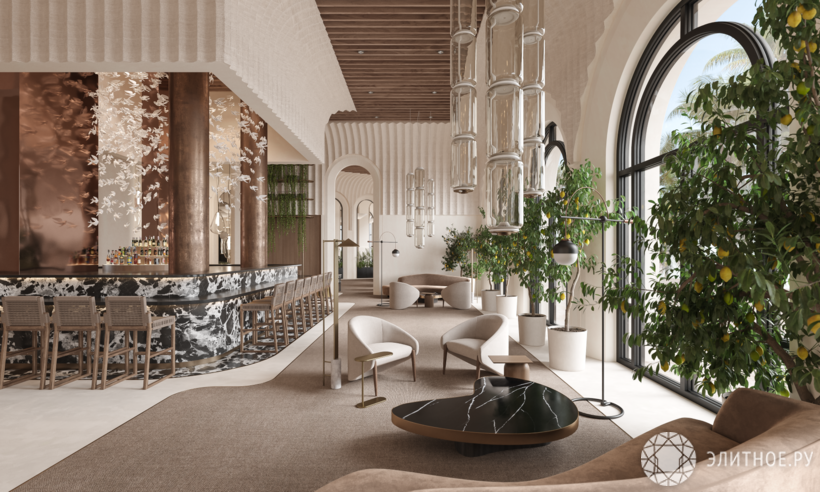 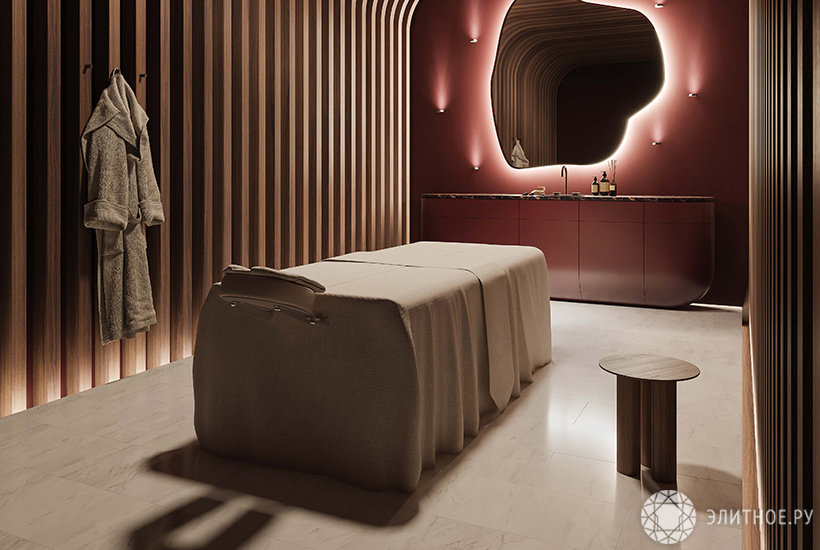 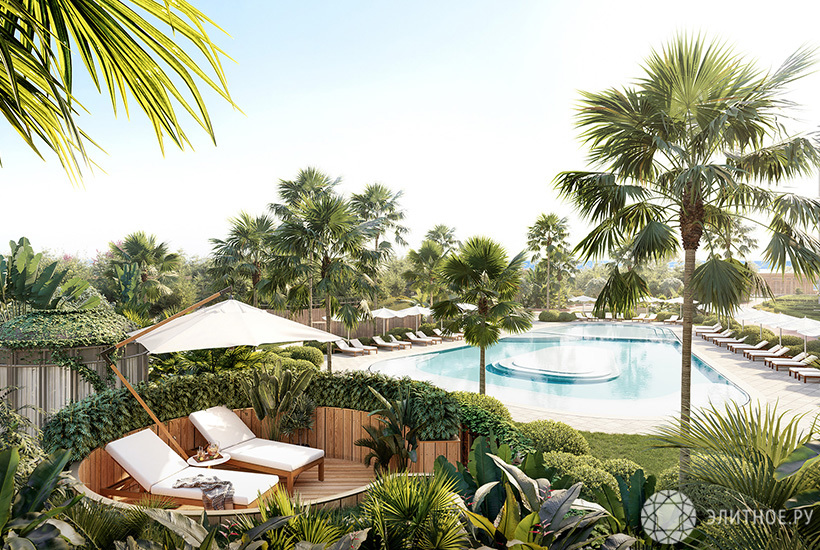 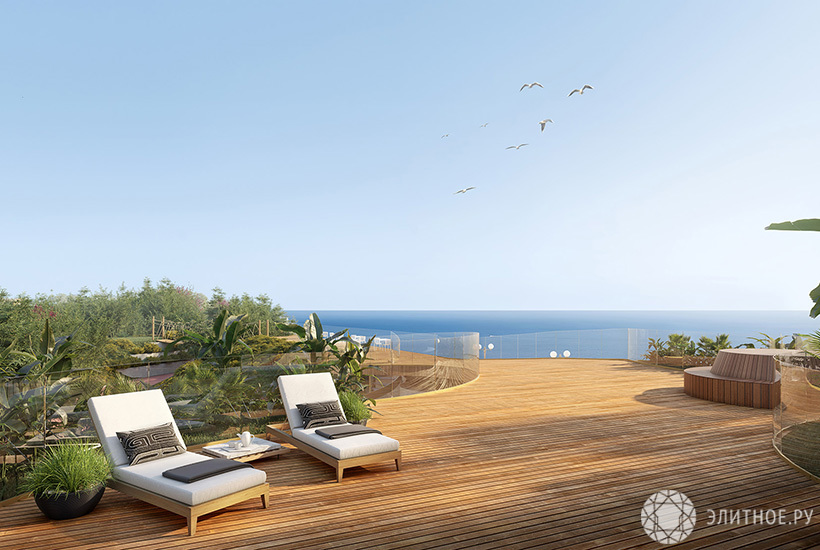 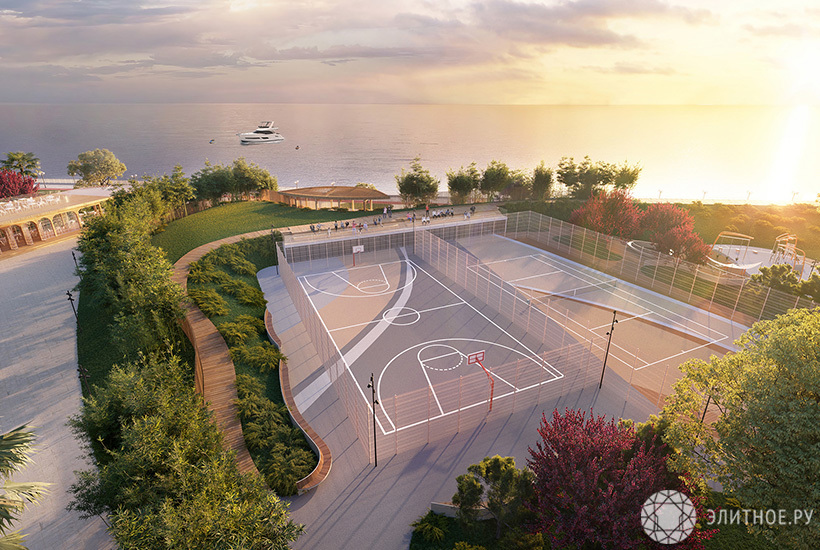 Collection lots in the project are villas and penthouses. In the eastern part of the complex there are 11 two-storey villas with an area of ​​255-571 sq. meter. The first floor is reserved for the kitchen-living room with lounge space, guest bedroom, dressing rooms and bathrooms. The second floor is occupied by bedrooms with exits to the terraces, bathrooms. Then comes the observation deck on the roof – a lounge area of ​​50 sq. meters with a swimming pool, gazebos and a summer kitchen. Retractable awnings and shade pergolas can be used for more privacy. 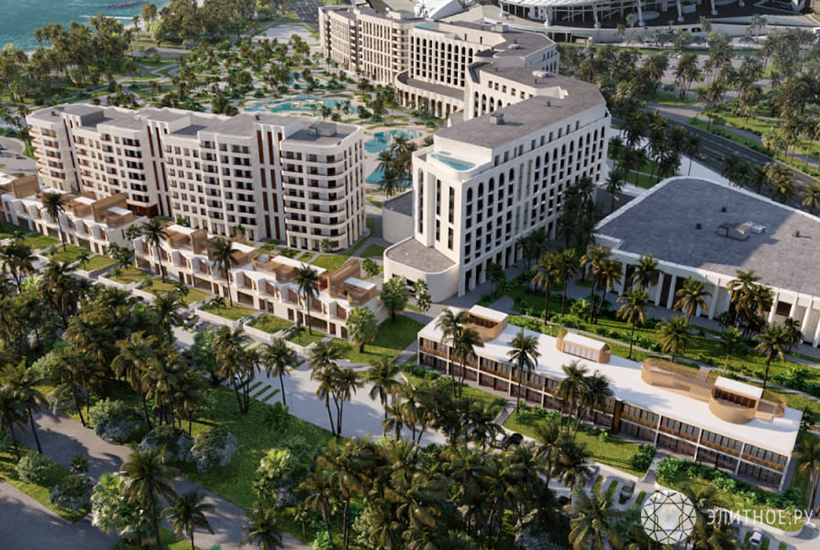 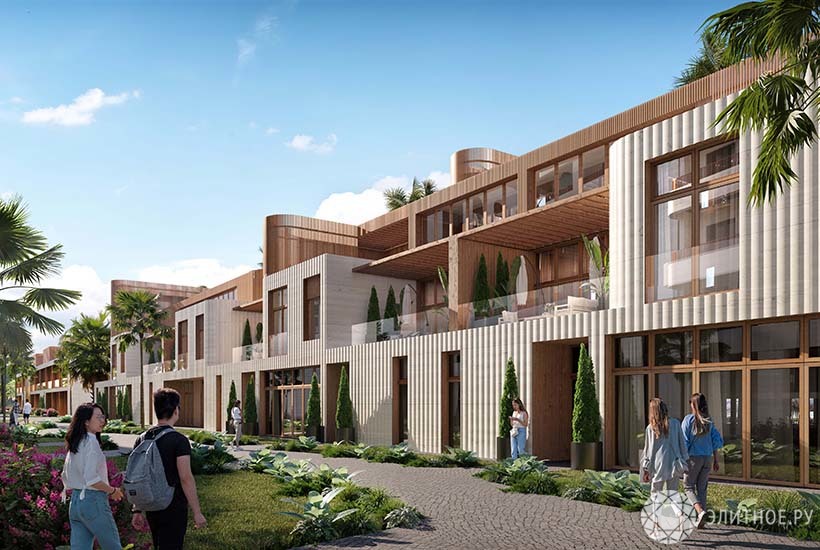 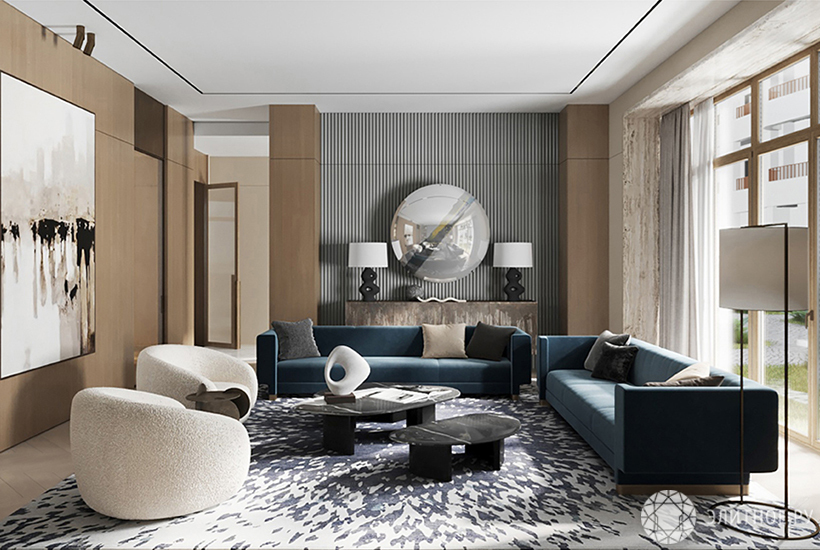 Penthouses have smaller areas than villas – 178-236 sq. meters. They are located on the sixth, seventh and eighth floors of the houses. The apartment has a large panoramic living room with dining and lounge areas, a master bedroom with a bathroom and a dressing room. From each room there is an exit to the balconies enveloping the penthouse around the perimeter. There is also a terrace overlooking the Black Sea and the Caucasus Range. 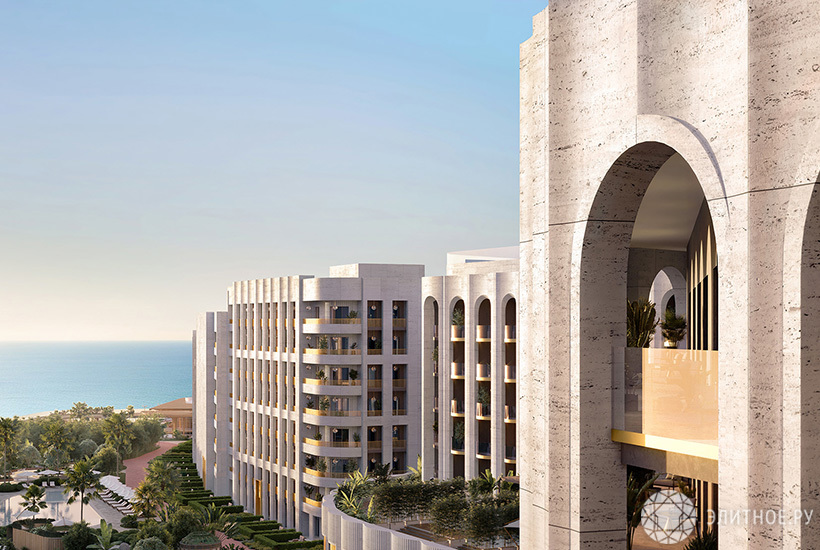 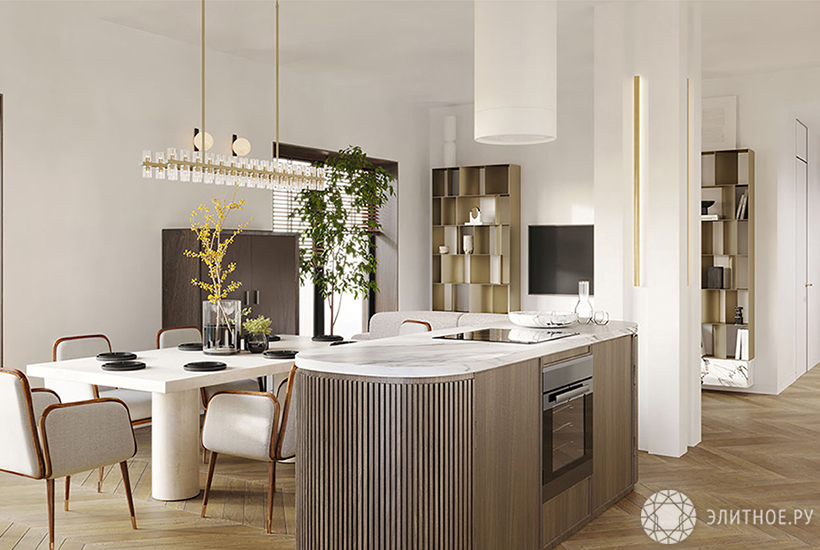 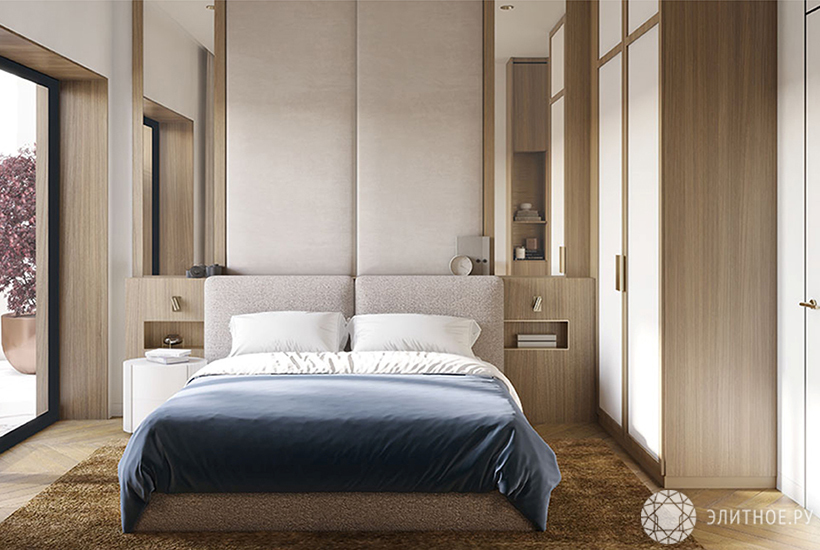 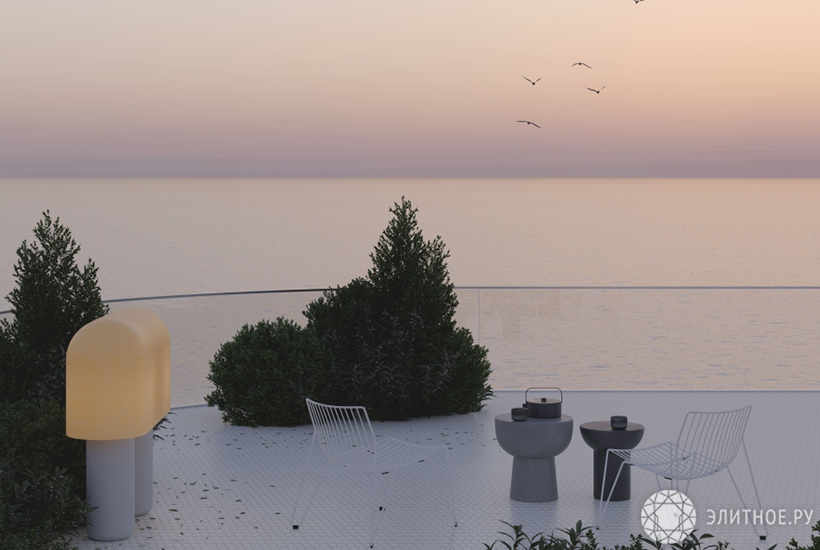 Piece items are always sold at a premium to the market. Average price per sq. m in Mantera Seaview Residence is 3.4 million rubles, and the maximum reaches a record for the Russian real estate market 6.5 million rubles. This is how much a “square” costs in a penthouse with an area of ​​​​228.7 square meters. meters with a terrace of 70 sq. meters. Despite the high prices, by June 2022, 51% of the apartments in the complex were purchased. At the same time, 6% of buyers purchased objects just as collection housing.

Bold furniture and accessories in apartment interior in Sweden