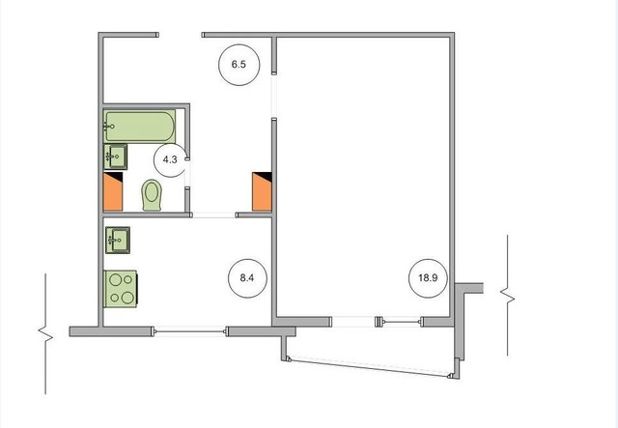 It seems to be: what to do with the apartment, which is redevelopment? In fact, options are available. Interesting solutions we’ve done, for example, on the upper floors of a series of P-44T (where the impact on the neighbors ‘ apartment minimal). Sometimes the owners of apartments on the lower floors also give written consent to so-called “voluntary deterioration of living conditions” — for example, in cases when the kitchen is expanded due to the bathroom.

In this article, we present such solutions for apartment P-44T. Even in such conditions (when all the walls in the apartment are load-bearing) due to minimal competent pereplanirovki you can organize the necessary functional zone: as one person, and for families with children.

The original layout
One bedroom apartment N-44T, depending on the section of the house, has an area of 37 sq. m to 39 sq. m. among its advantages include a comfortable loggia, a comfortable entrance hall and a spacious living room, stretched geometry which allows to divide it into functional zones. The kitchen is small: 7.5 sq m, but the airbox made into the corridor. The bathroom, the area of which does not reach up to 4 m, rather small and originally combined. 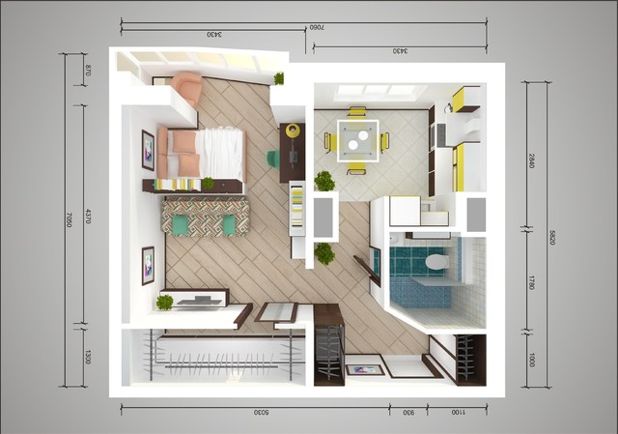 Redevelopment 1: Apartment for one person
In the living room of this apartment, as P-44T, it is advisable to equip four main areas: bedroom, living room and working place with computer and dressing room. In the latter fits more things and seasonal clothing and miscellaneous equipment: skis or skates, a snowboard. In the proposed variant (as in most cases, P-44T), I recommend to attach a loggia to the room. Really carry between them a partition does not work, but it can be done, to maximize the aperture — thus, the loggia becomes part of the room, and it is possible to put, for example, one or two chairs.

The bedroom and living area would need to be separated with partitions with through rack: to visually delineate the space, but not to create a feeling of tightness. The apartment is one spacious kitchen are not needed — compact fit. Please note that we moved the wall between the kitchen and bathroom, creating a niche perfectly formed refrigerator and sink. Corner bathrooms beveled, thereby expanding and the bathroom and hallway. In the corridor well fit two closets for clothing.

READ:  How to live a "die hard": the great house of Bruce Willis, which he put up for sale 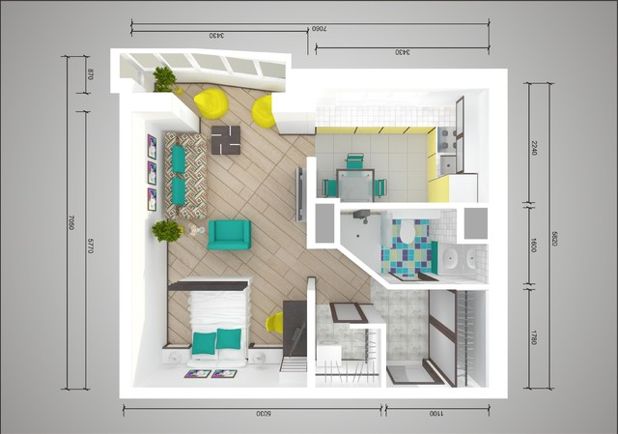 Redevelopment of 2: For a young couple
If the plans don’t have children, usually such customers are focused in the interior of the living room: in this variant of the redevelopment the main role we give this functional area and attach a loggia. Suggest a bedroom separated by a visually lightweight partitions, there is placed a computer Desk and a small bookcase.

Radically changing the geometry of the kitchen, bathroom and hallway. Not to put cabinets across the already small apartment, it is advisable to organize closet area in the hallway. You can also connect a washing machine (it is only important to organize properly the connection to utilities).

Dressing room in such a small space feasible, if you remove the passage from the corridor into the kitchen, extending in this bathroom, because its width will be reduced in favor of the spacious closet in the hallway. But in the opened space of the bathroom fits a shower stall. The kitchen is also extended, allowing to organize large cooking area along the window. 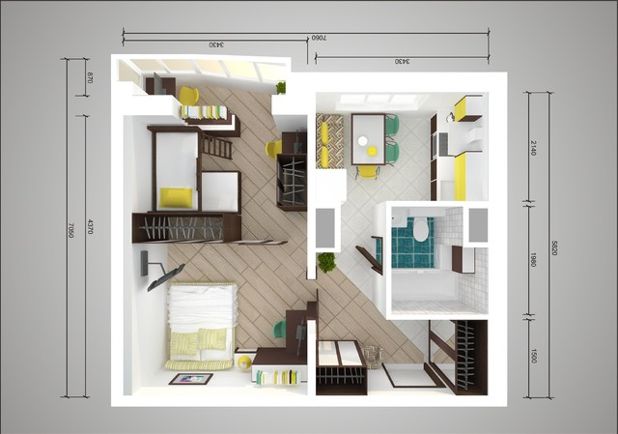 Redevelopment of 3: For family with two children
Not an easy task, but we are faced with it often. Of course, in this case, the family donates a full living area in favor of the child, in which to place the sleeping areas, a place to study and storage system. For these purposes, of course, more suited for convertible furniture or bunk bed. The working area in the form of a Desk with a computer placed on attached balconies, a former sill turn into a wall with a small shelf for books. Master bedroom is zoned from kids using the lightweight partition with a sliding mechanism. There is enough space for one more table and a small Cabinet for books and magazines.

In the kitchen to increase the number of seats in addition to chairs, we advise to put a small sofa. Headsets may be in the shape of the letter G, but can be a bit crowded. In the hallway you’ll fit in two closets for clothing. And to add to space dynamics, abutting tiles and floorboards on the diagonal. 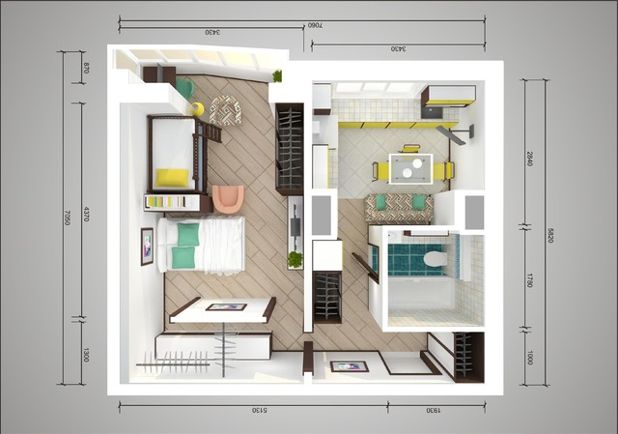 Alterations 3-a: for mothers with two children
The idea of planning a children’s similar to what I described in the previous example, while the sleeping area moms is a part-time living room — couch pulls out ahead. The construction of the full partition for zoning was irrelevant, therefore, this function is performed through the rack. Part of the room behind a partition in a spacious closet.

The woman often cook and host, so the kitchen was made larger by moving the partitioning towards the bathroom, putting back small sofa. The cooking area is located along the window. 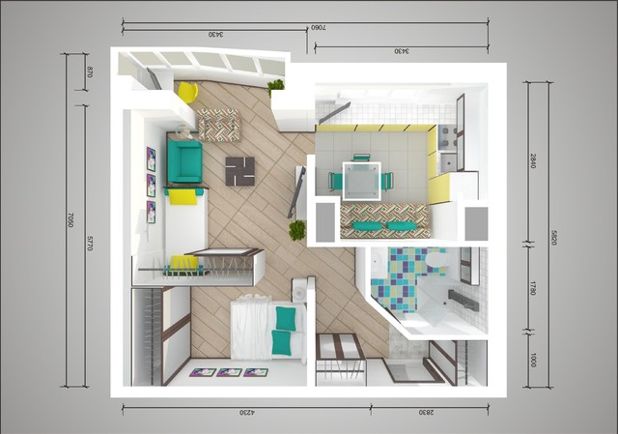 The redevelopment of 4: for parents and adult child
In fact, it is the task of creating a personal space for adults — two on the spot Studio; solved it by a sliding partition between the two zones. Suggest wall-transformer, which changes position and is rotated 90 degrees, forming a partially isolated space. Very handy when, for example, parents in the morning you need to go to the kitchen and not disturb the baby. Performs the role of the living room, expanded kitchen: here, a sofa and a TV. Accordingly, the passage from the kitchen is laid in the hall, and the partition is transferred in the direction of the bathroom.

IT’S YOUR TURN…
What are the pros and cons you see in the proposed redevelopment? Maybe you live in an apartment? What other ideas can be implemented on such little footage? 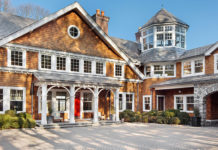 How to live a “die hard”: the great house of Bruce Willis, which he put up for sale 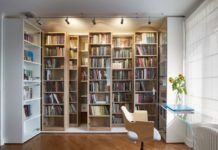 How to arrange furniture in a small room: 12 ideas and tips 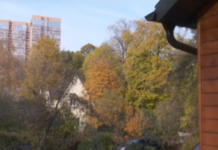 Private house in the city: where to find and how much?

Detox design: How to start “cleansing” for the benefit of the interior