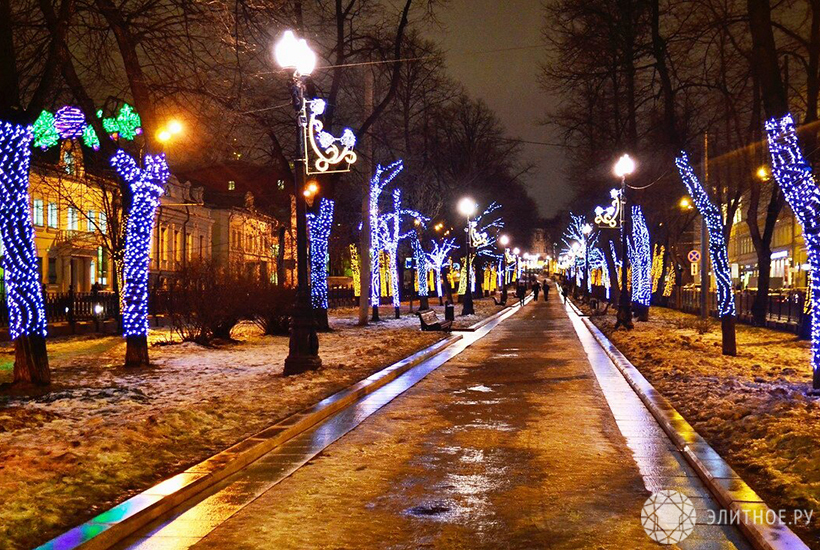 In pre-revolutionary and old merchant Moscow, parks, squares, boulevards and cozy green courtyards have always been considered one of its main features

Gardens appeared in the city in the XIV century, at the monasteries, the most famous of them was set up at the Nikolsky Gates of the Kremlin, on the Spaso-Semyonov Compound. Then, perhaps, all Russian tsars, city government and representatives of the Russian nobility paid attention to the development of the “green belt” of the city. Starting from Grand Duke Vladimir I and ending with Nicholas II, each of the sovereigns contributed to the greening of the city.

Under Tsar Mikhail Fedorovich, Provencal and double roses appeared in the Rubtsovsky Garden, under Alexei Mikhailovich – grapes and mulberry trees. And Moscow gardens aroused admiration even among worldly-wise foreign travelers.

Of course, the Romanov dynasty made the greatest contribution to the development of the green landscapes of Moscow: what are the “hanging” or “riding” gardens created in the 17th century on the roofs and terraces of the Kremlin buildings! Such structures, of course, required serious investments and were considered truly royal luxury, but the love of Russian sovereigns for garden art led to the fact that the city formed a tradition to ennoble any piece of land, from a front garden to a palace. 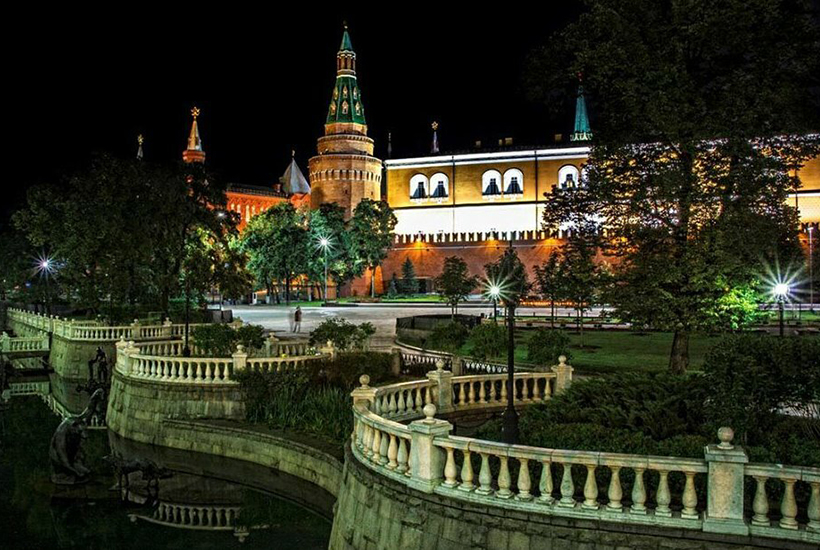 Russian aristocrats and the nobility also could not stand aside. Own gardens at city estates were decorated skillfully and with love. For this, eminent architects and famous gardeners were invited, trees and shrubs were planted, unusual plants were bought abroad. Sculptures, shady arbors, graceful benches, places for walking and relaxation – all this has become an indispensable attribute of a fashionable garden.

Just look at the estates that managed to survive after the revolution: for example, the summer residence of the Sheremetevs “Kuskovo” or the estate “Kuzminki”, closely connected with the history of the Golitsyn and Stroganov families. In the center, next to the Kremlin, splendor of such a scale, of course, was impossible to create, but it is enough to recall the mansion of Zinaida Morozova (Spiridonovka St., 17), where a luxurious garden was partially restored after a fire, to understand what importance Russian aristocrats attached to not only architecture, but also landscaping of city estates.

READ:  Scandinavian apartment with a cozy atmosphere in the evening 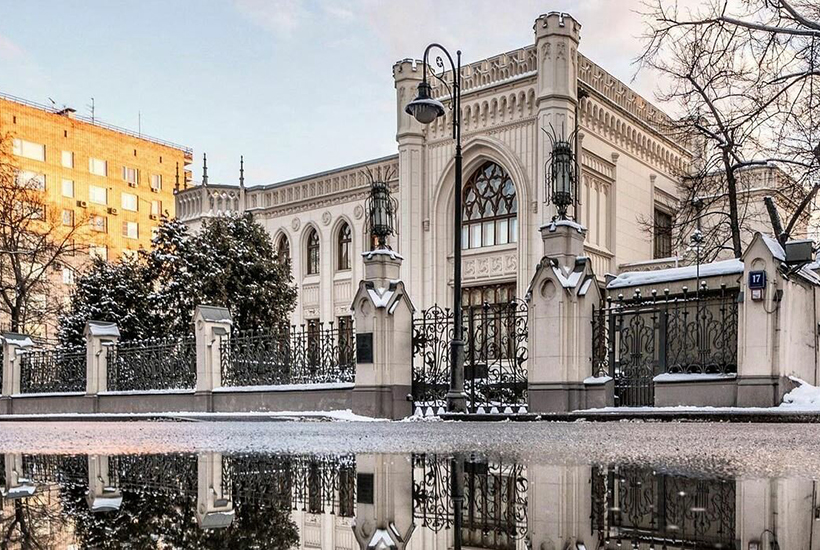 Neoclassicism and a new interpretation

Modern developers actively contribute to the revival of this tradition, beautifully equipping the adjacent territories of their new complexes in Moscow. Of course, not every one of them has such an opportunity, especially if the project is being implemented in the center: as in the pre-revolutionary past, the temptation to make the most of every square centimeter of expensive metropolitan land is too great.

We will tell you about how the landscaped area of ​​a modern house located in the very “heart” of Moscow might look like using the example of the “Teatralny Dom” De Luxe class quarter, which the Hals-Development Group of Companies erected on Povarskaya Street, 800 meters from the Kremlin.< /p> 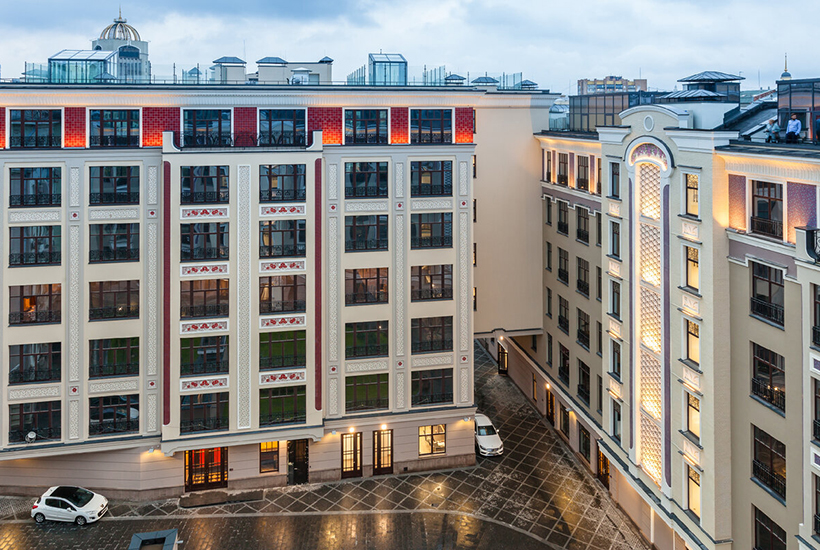 Perhaps the main feature of this project is the proportionality and stylistic unity of the architecture of the complex itself and its adjoining, private territory. A fragment of a historical building of the 19th-20th centuries – a neoclassical facade of the 19th century designed by architects Strukov and Hartmann, carefully restored by the developer, successfully combined with the modern part of the complex in the Art Nouveau style.

On the facade of the historical part of the complex, the old brickwork, stucco moldings and decorative elements have been restored, and its modern part is finished with beautiful flower panels made of glazed ceramics, made according to the sketches of artists under the guidance of architect Pavel Andreev. All this creates an original ornament that visually unites the buildings of the complex into a single architectural ensemble.

Decorative panels with plant and flower motifs on the facades of the new buildings, fashionable in the modern capital at the beginning of the last century, helped to combine the two architectural styles of the Theater House quarter, classic and modern, creating their perfect dual unity. This solution gave the complex a noble and recognizable appearance, which Hals-Development skillfully continued in the design of the private inner territory.

The beauty of natural shapes and colors, flowing lines, the feeling of continuous movement, artistry and intimacy – all this was embodied in the space of the garden. The patterns on the walls seem to continue in the bends of the branches of living trees and shrubs planted in the yard, are reflected in the window panes and are guessed in the ornaments of highlights from the forged lanterns. In the landscape design project, the “theatrical” theme is also elegantly beaten.

The courtyard of the quarter is built in such a way that its central part is a kind of proscenium, around which the landscape “plot” unfolds. If you go back a little, then in the surrounding lanes, Khlebny and Merzlyakovsky, you can hear the clatter of hooves and the sound of a cab of a late cab driver and wait for the lamplighter, who manually lit the street lamps every evening. Of course, today the “fire” in the courtyard of the “Theater House” is lit automatically, which, however, only enhances the magic of the place itself and its creative atmosphere, reflected in the name of the quarter.

Once such famous figures worked here, like Meyerhold and Stanislavsky, who created their experimental theater studio on Povarskaya. In the courtyard, as in a real theater, you can also notice the mysterious play of light: the territory is provided with special lighting for walking paths and plants.

The landscaping project here is also challenging. It is created in the concept of continuous flowering. In addition to maples and lilacs, which have long taken root in Moscow, deciduous and coniferous shrubs will be planted here: spindle tree and viburnum, fieldfare and cotoneaster, mountain pine and various types of junipers. Japanese spireas and hydrangeas will create a special, festive atmosphere in the Theater House.

The landscaping of the courtyard of the Theater House is not only almost 1000 trees and shrubs, but also recreation areas, where even benches designed in the style of Antonio Gaudi remind of art. And for children in the courtyard of the complex there are swings and the Laurentius Castle playground.

With the onset of spring, when everything around sings the anthem of new life and beauty, residents of the Theater House quarter can invite their friends to an unusual premiere – “green performance” staged by nature itself.

House for the soul in the Pyrenees

Dome homes: a scoring role in the construction underground

Soft and cozy design of a large house in Florida

The house with the greenhouse in London