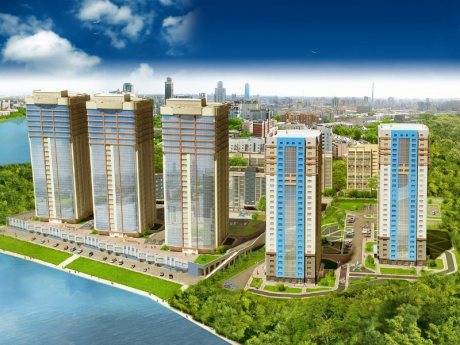 The “new” portal Urbanus.ru summed up the work of developers operating in the market of Yekaterinburg, 2017. We offer to your attention top-10 companies by the number of apartments sold and apartments.*

The leader in sales were LSR Group, has entered into over the past year, 802 of the transaction. The most successful was the LCD “dawn”, which was implemented 203 of the lot. The complex is located near the center, in the area of concrete. In the nearby forest Park “Stone Tents” — a popular place of recreation for residents of the city. In addition, within walking distance is a large pond — lake Shartash. The minimum price of apartments starts from 2 657 340 rubles. Buyers can avail the mortgage at 8.5%. The district has a fairly developed social and commercial infrastructure. LSR group is a Federal player in the residential real estate market, the key regions which are the St. Petersburg and Leningrad region, Moscow and Moscow region, Yekaterinburg and Ural region.

With a slight delay, should the company “Sinara-development” with 729 deals at their facilities. The most “running” turned out to be the LCD “Change”, consisting of 319 lots. Offering residents children’s club, shops, a pharmacy, and a landscaped walking areas. The apartments have a clean finish “turnkey”. When buying, you can use these auxiliary financial instruments such as installment, mortgage, maternity capital, housing certificates. The company “Sinara-development” is part of the “Group Sinara”. The developer operates in Yekaterinburg, Volgograd, Karachay-Cherkessia. In total since inception in 2009, the developer has implemented more than 25 projects, whose total area exceeded 687 thousand square meters.

Closes the three leaders of the company “atomstroykompleks”. The developer spent over the past year 564 of the transaction. The most successful project “Woods. House in the Park” in the neighborhood of oz (245 lots on the po). The choice of the buyer presents one-, two – and three-bedroom apartments of different sizes. But, regardless of the area, they will be rented with a fine finish and virtually ready to move in. “Atomstroykompleks” is a major player in the construction market of the Urals region. The company has 12 own plants that provide construction materials. For 22 years the developer has built more than 2.8 million square meters of housing and many social facilities.

In fourth place, according to experts of service “Rating of buildings” was a group of companies “ten” (328 deals), the most successful project which LED to “Eureka” (has been renamed, previously — the apartment complex “Campus”) — was implemented in 117 lots. Multifunctional complex consists of 484 apartments and apartments with decoration “turnkey”. The complex was created primarily for the needs of young families. It is about a five minute drive from Ekaterinburg city centre. LCD-equipped four-storey Parking for 86 cars. To buy an apartment or apartment complex by one-time full payment discount and in installments or mortgage from banks-partners. GK “ten” was founded in 1992. Today HC “ten” is a large investment and trading holding company operating in the Urals region. It is noteworthy that in Moscow, a developer of the same name. But they are two different companies that do not have a friend to friend relationship.

READ:  Shades of green and floral motifs in the interior of a home in Seattle

Fifth place went to GK “kortros is a management” (part of Russian business group Renova, controlled by Viktor Vekselberg) 321-th transaction at the POS. All Ekaterinburg lots were implemented within the project of complex development of territories — residential complex “Academic”. The total construction area of comfort class is huge and amounts to 9 million sq. m. (however, to date, the degree of implementation of the project is not big, only 12%). The minimum area of the apartment is 37 sq. m., price starts from 2.7 million rubles. The total implementation period is 20 years (2006 to 2026). In the center of plans to introduce a large shopping center, covers an area of 350 thousand square meters and offices and points of entertainment. In addition, the developer promises to build a medical campus industrial Park and diplomatic town and the University quarter. As of 2017 the activities of the group companies is situated on eight regions. Over 12 years of work GK “kortros is a management” has built a 2.5 million sqm of real estate.

Sixth place is occupied by Acons Group. Last year the company sold on POS 258 lots. They all occurred in the project of integrated development of the LCD Clever Park, located six minutes from the city centre. LCD, includes eight houses, on opposite sides of the river Iset, the total number of apartments in the complex is 2.2 thousand in addition, there are 2 667 underground Parking spaces and ground 795 seats for automobiles. Scope Acons Group includes Moscow, Yekaterinburg, Perm and Orenburg. For 13 years, beginning in 2004, the developer has built a total of more than 1 million sq. m.

Followed by GK “Dominvest” sold 238 lots. As in the previous case, all the lots were the only project — residential complex “Olympus”. The project has underground and surface Parking. The size of the studios ranges from 25 to 30 sqm, two-bedroom apartments — 38,9 sq. m and 40.2 sq. m, two bedroom — 75 sqm Apartments have large Windows and panoramic glazing of loggias. The complex is located in the South of Yekaterinburg, about eight minute drive from the city centre. Field of activity GK “Dominvest” is quite extensive. The group is engaged in construction of residential high-rise buildings, industrial and commercial property. In addition, it includes a real estate Agency. Among the objects handed Builder it is possible to note the complex Beloyarsk nuclear power plant in Zarechny, and also ZHK Bazhovskiy.

Followed by GK “Stroytek”, which was made last year 184 of the transaction at the POS in Yekaterinburg. All the lots were implemented in the residential complex “Contemporary”. The yards of the residential complex is equipped with children playgrounds. There is underground Parking and Parking. House territory is fenced, is equipped with alarm system and video surveillance. Near the complex there are public transport stops, road junctions, shops, kindergartens, schools and University. Within walking distance Shartashskaya forest Park and lake Shartash. The price of a Studio in the first stage of the residential complex starts from 2 106 000, one-bedroom apartments — from 2 581 000 rubles, “kopeck piece” -3 606 000, for a two-bedroom apartment will have to pay a minimum of 5 329 000 rubles. GK “Stroytek” was founded in 1991. The group performs a full range of construction works. The activities of the developer is concentrated in Ekaterinburg. Among the projects the company has a large commercial and social infrastructure, such as the water Park “Limpopo” shopping center “Spring”, diagnostic building design Bureau No. 1, metro station “Botanical” and others.

READ:  The apartment with stained glass window and unusual Wallpaper in Paris

Ninth place in the ranking is a Finnish construction group YIT, implemented in Ekaterinburg lot 171, 146 of which were sold in the residential complex “Quartet”. The complex consists of four buildings, one of which has 16 floors, and the remaining three for 24. The LCD is equipped with a multi-level surface Parking. The first and second floors are reserved for offices and shops. In walking distance of five schools and seven kindergartens. A ten minute walk from a tram stop and taxi stop. Concern YIT is one of the largest Nordic construction companies. In its field of activities includes housing and commercial properties, as well as integrated development of territories. February 1, 2018, the Union took place YIT with the company “lemminkäinen”.

The last place in the ranking took GK “SKON” 162 completed lots. The largest number (99 deals) had the LCD “Hands” in the Railway district of Yekaterinburg. The complex is a four-section and has a variable number of storeys. Apartments are with fine finish. They are equipped with laminate, Wallpaper, interior doors of MDF, safe-Deposit box-doors brand “guardian”. There is an underground one-storey car Park, which is 108 Parking spaces. GK “SKON” was founded in 1994. Initially business was a network of gas stations. The first building project was a shopping center in Kamensk-Uralsky, which opened in 2011. At the moment GK “SKON” is an investor and developer of several of the LCD in different districts of Yekaterinburg.

* The rating takes into account the flats and apartments sold at the POS without taking into account commercial areas of assignments and wholesale deals (five flats or apartments).

The total number of lots on the po

Residential complexes of the company

House for enjoying the sea views in the United States

Getting ready for spring with IKEA: fresh inspiration from a favorite brand

Scandinavian apartment with a cozy atmosphere in the evening

Entrepreneurial Advertising: The Future Of Marketing